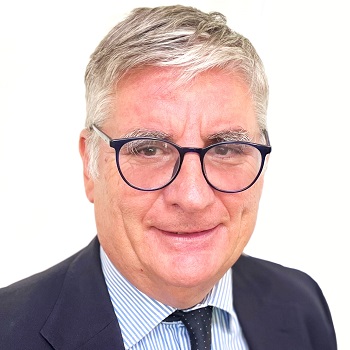 Director
Fabrizio COSTA (Italy)
Mr. Fabrizio Costa has been a member of the Board of Directors since July 2022, having previously served as Advisor and Alternate Director for his constituency. Mr. Costa is a senior civil servant with diversified experience in European policies, enterprise competitiveness, policy design and management, intergovernmental financial relations, export credits, cooperation to development and international relations. He has held a number of managerial and high-ranking positions at the Ministry of Economy and Finance, Government of Italy, at the Regional Administration of the Marche region, and at the National Agency for Inward Investment and Economic Development (Invitalia). Since 2017, he has been the economic and financial counsellor of the Embassy of Italy to the People’s Republic of China. He was also member of the board of several institutions: SACE-Italian export-credit agency, SIMEST SpA Committee, Imprenditoria Giovanile SpA, National Agency for Innovation, and Aristide Merloni Foundation, Svim SpA. He has worked as an official in the Executive Board of the World Bank and was for many years the representative of the Italian Treasury at the Paris Club, Organisation for Economic Co-operation and Development, and European Union export credit groups. He was a member of the several G7 experts group, including the “Debt expert” group which supported the International Monetary Fund and the World Bank for the definition of the HIPC Initiative. He holds an MA in economics from the University of Manchester and an MA in European studies from the Institute of European Studies, A. De Gasperi. He is from Italy.
Alternate Directors
Camillo von MÜLLER (Germany)
Minna AALTONEN (Finland)
Advisors
Kevin BESANCON (France)
Philippe BOOL (Netherlands)
Alexandra FIDALGO (Portugal)
Maria Elena KOMODROMOU (Cyprus)
Sami MASRI (Luxembourg)
Philippe NIZEYIMANA (Belgium)
Irina OBUĆINA (Croatia)
Michael Pat O’DONOGHUE (Ireland)
Victoria SCHREITTER (Austria)
Ana SOBRINO (Spain)
Achilleas TZIMAS (Greece)
Contact Information
constituency9@aiib.org

Home About AIIB Governance Board of Directors Fabrizio COSTA